Timo Werner will take the place of Christian Pulisic, and Reece James is a contender to make his Premier League debut when Chelsea and Brentford square off on Saturday.

Chelsea will be looking to keep their hold on third place in the Premier League league when they visit Brentford on Saturday afternoon at Stamford Bridge. Thomas Tuchel, on the other hand, does not have many urgent fitness concerns to cope with ahead of his team’s next match.

Ben Chilwell has been missing from the team for an extended period of time as he continues to heal from a knee injury. Despite the fact that he has returned to training, Callum Hudson-Odoi is still not healthy enough to be included in the matchday squad. Christian Pulisic will be the third player to be absent from the Chelsea squad for their match against Brentford.

Tuchel mentioned during his pre-match news conference that Pulisic is suffering from jetlag and has not been able to practice much after returning late from international duty with the United States Men’s National Team. In addition, the Chelsea manager delivered additional squad news updates at his press conference, including confirmation of Reece James’ return to the club.

Tuchel said, “Hudson-Odoi and Chilwell will miss the game tomorrow. Callum still feels his Achilles a bit and has some lower back problems. Everyone else was in training. Reece James is ready to go and is in the squad.”

“Thiago is a bit different than Christian. Thiago did not play the third match with Brazil, and he came back one day earlier. He did not have the same jetlag as Christian. He was here yesterday and trained today so is available for tomorrow.”

“For Christian, we need to decide. He did not train today. We decided to give him another recovery session today, so he did not train. He is here but feels very tired due to the time difference. He played 85 minutes one and a half days ago. He played all three matches for USA. We will figure out if it makes sense for him to play tomorrow.”

Because Christian Pulisic is expected to be sidelined for the match against Brentford, Timo Werner will receive a rare opportunity to start on the left wing. Mason Mount will take up an advanced position on the right side of Chelsea’s attacking unit on Saturday, with Kai Havertz expected to be at the forefront of the Blues’ offensive unit.

When it comes to the midfield, Tuchel will most likely continue to rely on the talents of Jorginho, N’Golo Kante, and Mateo Kovacic, as he prepares to play a 4-3-3 formation against Brentford on Sunday afternoon. With Kante and Kovacic serving as box-to-box midfielders, Jorginho will form the foundation of the midfield triumvirate for the Blues. 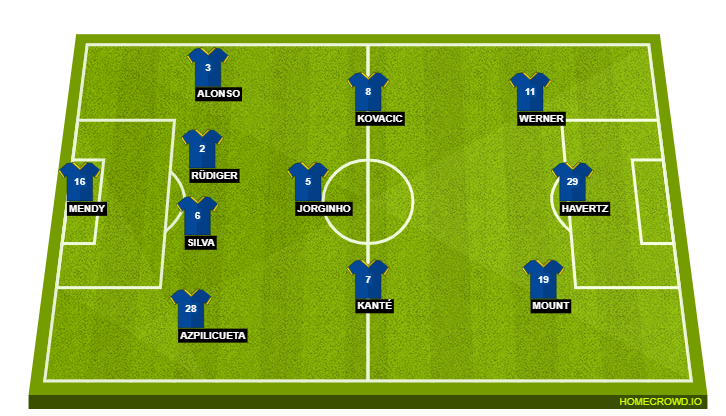