The match between Chelsea and Leicester City is scheduled for Thursday evening at Stamford Bridge. Chelsea will be eager to get back on track after their painful FA Cup final defeat. They have two games remaining in the Premier League season and are looking to finish in the same third-place position as they are today.

The Foxes are coming off a fantastic 5-1 win over Watford, while the Blues were denied the FA Cup after losing 5-6 on penalties to Liverpool. The Foxes will be looking to keep their winning streak going against the Blues.

Timo Werner’s participation is in doubt after he seemed to sustain an injury prior to the last encounter. Furthermore, if it is discovered that Thiago Silva is suffering from muscular problems, he may be benched. He was carried from the pitch before the penalties were taken, despite finishing the FA Cup final. Kai Havertz may be able to participate in the game scheduled for the middle of the week after sustaining a hamstring injury.

Callum Hudson-Odoi and Ben Chilwell are unlikely to play in any of the remaining games of the current season.

Thomas Tuchel is expected to use a 3-4-3 formation, however, he may make some tweaks depending on the last game.

The Blues are expected to start the encounter with Edouard Mendy in goal. Nothing would please the goalie more than to put in a strong performance and maintain a clean sheet.

Andreas Christensen might start the game in the midst of the Blues’ defence, with Antonio Rudiger playing left centre back. Cesar Azpilicueta would be an excellent choice for the right centre back position.

N’Golo Kante and Mateo Kovacic might play holding midfielder, with the former having a more important position in the team’s setup. The two players would work together to establish themselves as the midfield’s dominating force.

Mason Mount and Kai Havertz will play attacking midfielder and defensive midfielder, respectively. The two players would collaborate with the objective of giving the forward several quality scoring chances.

In Chelsea’s midweek fixture, it’s probable that Romelu Lukaku may start upfront. The striker, who is 29 years old, will be hoping to put the ball in the back of the net when he faces the Foxes’ defence. 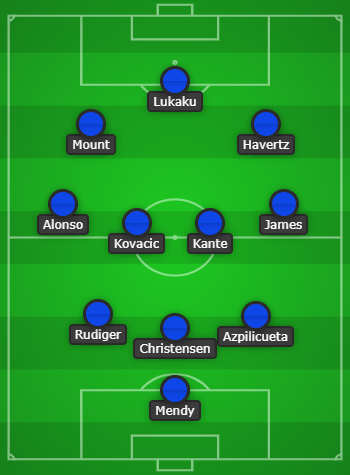