Kovacic in for Kante; Lukaku a doubt: Predicted Chelsea lineup against Southampton

Southampton will host Chelsea at St. Mary’s Stadium on Saturday, with Mateo Kovacic taking N’Golo Kante’s place in the starting lineup and Romelu Lukaku’s in doubt for the match up.

Chelsea will be trying to get back on track when they face Southampton on Saturday afternoon at St. Mary’s Stadium in the Premier League. And, ahead of his team’s next meeting, Thomas Tuchel will have to deal with a number of injury concerns.

Lukaku (Achilles) and Hakim Ziyech (knee) are both questionable for Saturday’s encounter against Southampton, according to the club. Callum Hudson-Odoi (Achilles) and Ben Chilwell (knee) are both set to miss Saturday’s encounter against the Red Devils due to respective injuries. During his pre-match press conference, Tuchel also provided an update on the injuries to Lukaku, Ziyech, and Hudson-Odoi, among others.

Thomas Tuchel said, “Callum Hudson-Odoi is still out and we have a little doubt over Romelu and Hakim Ziyech. They were not in training yesterday and we need to see if they are able to join in today’s session. We need a test and confirmation following training, to see if they are available for tomorrow. Romelu has achilles pain, it’s nothing serious but it is just quite painful for him.”

“With Callum, it doesn’t look too good and it is not a matter of days at the moment, it’s more a matter of weeks. It’s a shame for Callum because it’s a setback for him. He started in the Club World Cup final and had an assist in that game. He was crucial on the left-hand side for us in that game and during that part of the season where he was playing and contributing regularly.”

“It was probably the part of the season where he was playing his most regular football and was doing very well for us, sometimes as a left wing-back but mainly as a more attacking winger on the left. He was growing into his role and suddenly it stopped his season. It is not his fault, of course, but it is certainly a setback for him and for us to have him missing for a while now.”

In light of the fact that Lukaku and Ziyech are both questionable for Saturday’s encounter against Southampton, Kai Havertz is anticipated to be the focal point of the Blues’ offensive attack. And Timo Werner and Christian Pulisic will compete for one of the last two spots behind the German national team’s captain in the next World Cup qualifiers. Mason Mount will very definitely be one of the two wide attackers, which explains why this is the case. Werner has a potential to dethrone Pulisic as the team’s third offensive option if he plays well.

As a result, N’Golo Kante is anticipated to be replaced in midfield by Mateo Kovacic, while Marcos Alonso is expected to revert to his previous position as left wing-back.  Kovacic and Jorginho will play together in the middle of the park, with Kante on the bench.

Due to the expectation that Reece James will retain his position as right wing-back, it is possible that Cesar Azpilicueta may be moved to the centre of the back three instead. Thiago Silva, who is likely to be rested for the encounter against Southampton, will be replaced by the Chelsea captain, who will line up with Trevoh Chalobah and Antonio Rudiger in the centre of the Chelsea defensive unit. Finally, there is no getting past the truth that Edouard Mendy is the man in the middle of the field/ 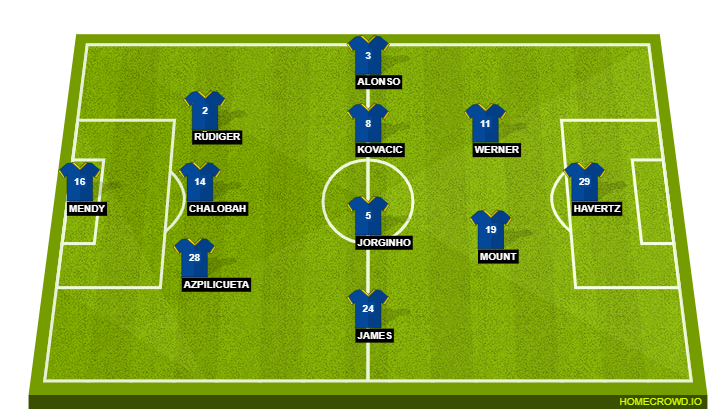