This weekend, the Premier League is headed to Stamford Bridge for a restart after the season’s final international break. Both Chelsea, who are in the fourth position, and West Bromwich Albion, who are in danger of relegation, will be desperate for a win.

The Blues are going strong in two other competitions as well. They have advanced to the Champions League’s last eight and to the FA cup semi-finals.

Meanwhile, the West Brom team and their manager Sam Allardyce will be hoping for a miracle from now till the end of the season to have any chance of staying up.

N’Golo Kante is out of contention and is also a doubt for the game against Porto. Jorginho, Mason Mount and Callum Hudson-Odoi returned from the internationals with slight niggles and will be assessed ahead of the match.

Thomas Tuchel will be relieved to see Tammy Abraham and Thiago Silva back in the training camp, fit and available.

After a dental procedure that saw him miss the international games, Edouard Mendy will start and guard the Chelsea goal.

Tuchel will go with his three trusted centre-backs in Cesar Azpilicueta, Andreas Christensen, and Antonio Rudiger. All three have been vital in this unbeaten run which means Thiago Silva might have to wait for his chance.

Reece James and Marcos Alonso are likely to be the wing-backs in the Chelsea lineup. The duo will be expected to contribute both in the attacking and defensive aspects of the game.

We are likely to see Jorginho and Mateo Kovacic in central midfield in the Chelsea lineup. The technically gifted duo will have to keep possession of the ball and try and create openings for the forward players against a side who will be sitting deep in their own half.

Mason Mount showed great form in the international matches and if fit, he will be one of the first names on the teamsheet. He is expected to start in a two behind the striker in the Chelsea lineup.

Timo Werner had a difficult time with Germany over the last week and will be hoping for a confidence boost against the lowly Baggies.

He is likely to partner Mount while Kai Havertz could keep his place up front despite Tuchel having more conventional options to choose from. 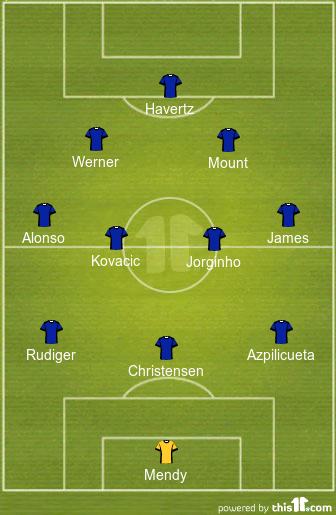