Blues boss Lampard revealed his sympathy for the right-back following his red card after the final whistle that added a sour note to an impressive full international debut in England’s 1-0 Wembley loss to Denmark.

And the Stamford Bridge manager hailed the 20-year-old’s rapid rise, having been on loan at Wigan little more than a year ago.

Tonight’s game was full of emotion, desire and hunger. Proud to have made my full senior debut in such a testing game. I take full responsibility for the Red card after the final whistle. Moments like this will make me stronger! pic.twitter.com/PYcZf9WMyF

“His progress is phenomenal. When he played at Wigan in the Championship, I watched him closely and tried to take him to Derby in that January window and it didn’t happen,” said Lampard.

“And the great thing about Reece and a lot of the other younger players at the club is that they are very open to that – they want to improve all the time.

“He’s going to be a fantastic player for this club for a long, long time” 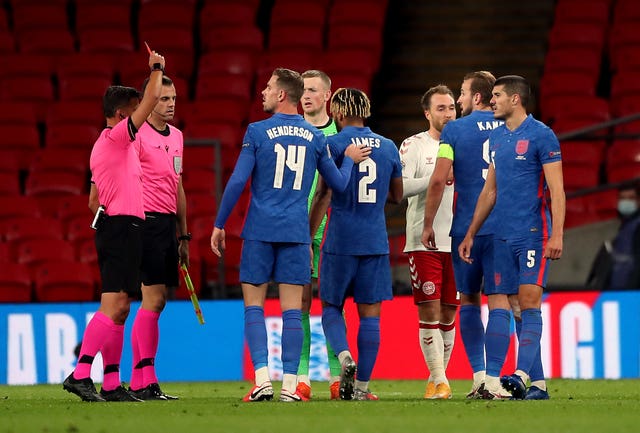 “So with his great natural talent that he’s got, his great physical attributes and the things we can work on, he’s going to be a fantastic player for this club for a long, long time.”

James impressed amid England’s laboured loss to Denmark, showing boss Gareth Southgate his range of abilities on the right flank.

The marauding full-back has been in fine form for Chelsea at the start of the new campaign too, leaving Lampard excited for an even brighter future.

Lampard even conceded he could understand James’ dismissal for dissent after the final whistle against the Danes, though admitted he had cautioned the youngster over any future repeat.

“I thought he was very good and I expect that because I expect a lot from Reece,” said Lampard.

“I did have a word with him about the end, the fact that he got involved with the referee.

“So, while no one’s a saint, it is also definitely one for him to learn that when you have a performance of that level for your country you’ll get a lot of plaudits and there was no need for him to get involved with the referee after.

“It was a pretty simple conversation and something he’ll definitely take on board.”

Christian Pulisic, Edouard Mendy and the Chelsea stars Frank Lampard is working with in training

Chelsea came close to signing Miralem Pjanic before the midfielder joined Barcelona in the summer, according to reports. The 30-year-old…

Global Day of Prayer with #PastorChris