Chelsea FC are have scheduled further “direct contact” with Manchester City to close a deal to sign Raheem Sterling, according to Fabrizio Romano.

The south west London side have been strongly linked with a move to bring Sterling to Stamford Bridge this summer amid speculation suggesting that the England international could be on his way out of The Etihad.

Italian reporter Romano claims that the London side held “positive talks” over a deal for Sterling on Friday as they look to strike an agreement for the former Liverpool FC star’s move to the club.

The deal is close, with only the final details on the club and player side to be agreed, according to the Italian reporter, as Chelsea FC look to make Sterling their first signing of the summer transfer window.

Thomas Tuchel has been the main driving force behind Chelsea FC’s interest in Sterling, and the German head coach has been pushing “since day one” for the Blues to land the England international, Romano added.

Posting on his personal Twitter account, Romano said: “Chelsea have new direct contact scheduled with Man City to close Raheem Sterling deal. Positive talks also on Friday, waiting for final details on both player and club sides in order to complete the agreement. 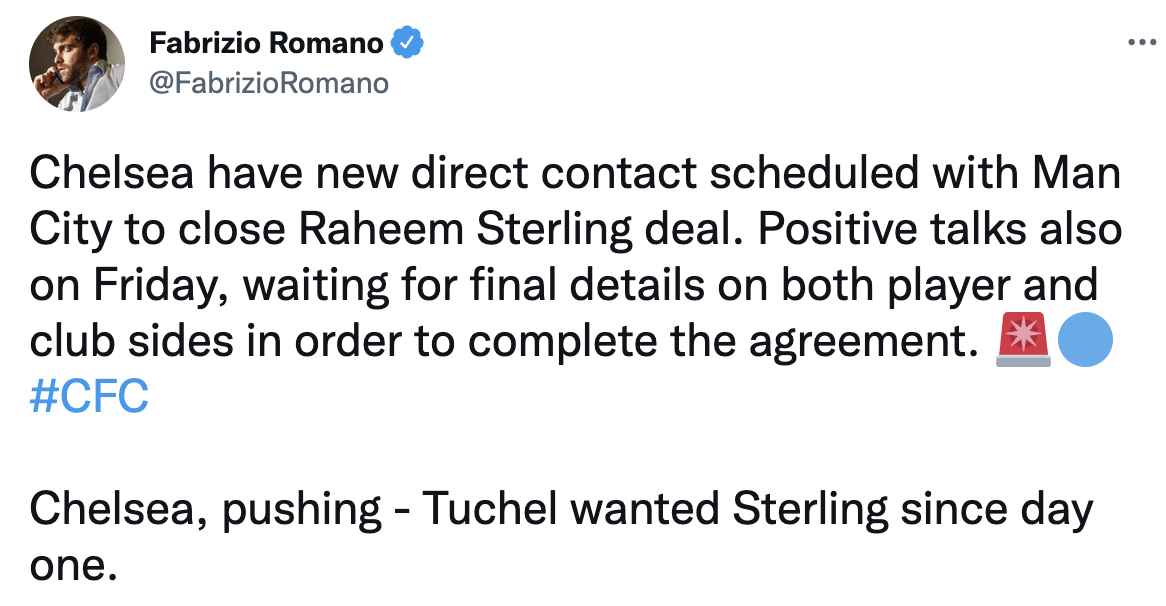 Chelsea FC are believed to be on the lookout for a number of new signings this summer as the Blues look to bolster their squad with the players Tuchel feels will help to transform them back into Premier League title challengers next season.

The south west London side finished third in the table and without a major trophy last term, and they will kick off the new campaign with a trip to face Everton on the opening weekend of the season.