It has been a slow start to the summer transfer window for Chelsea. The Blues are yet to make a signing so far but may soon get their first piece of activity completed. Thomas Tuchel will be eager to strengthen this summer as he looks to build on last season’s Champions League success, but has mainly been dealing with outgoings in recent weeks.

As the window enters its final month, Express Sport looks at which players could still leave Liverpool this summer and who Jurgen Klopp could bring in to further strengthen his squad.

The Blues main priority in the current transfer window is recruiting a new striker.

Timo Werner was unable to deliver in front of goal last campaign, which has resulted in Chelsea being linked with a number of top centre-forwards. 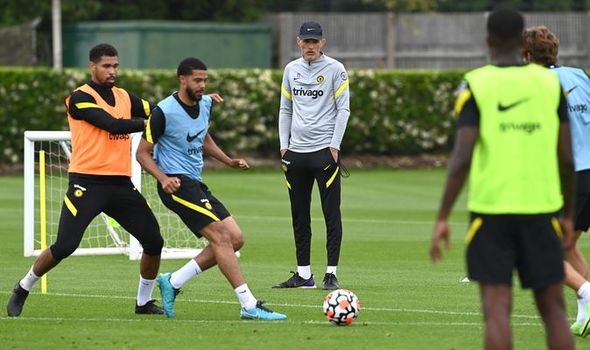 Borussia Dortmund striker Erling Haaland has been the main man linked with a switch to Stamford Bridge, though his hefty price tag could prove to be a stumbling block.

Elsewhere in this department, Robert Lewandowski is another name that has been mentioned.

The Bayern Munich striker has been in fine form for a number of years, but is expected to remain at the Allianz Arena.

A move for former striker Romelu Lukaku also seems to be dead in the water due to Inter Milan unwilling to sell the Belgium international.

Danny Ings and Stuttgart striker Sasa Kalajdzic are two possible cheaper alternatives in the Blues’ hunt for a centre-forward.

Midfield could also be another area that is improved, with a defensive-minded player a possibility.

West Ham midfielder Declan Rice is the obvious choice in this department, though the Hammers are demanding in excess of £100m for his services.

Monaco youngster Aurelien Tchouameni is reportedly another player being considered by Tuchel, having impressed in Ligue 1.

A number of players have already left the club this summer, and more could soon be on their way out.

Goalkeeper Kepa Arrizabalaga could leave Stamford Bridge in search of regular game time, after admitting he “would be lying” if he admitted to being happy with his current situation.

In defence, Italian duo Emerson and Davide Zappacosta could both exit due to only having one year remaining on their contracts.

Fellow outcasts Matt Miazga and Baba Rahman have no future at the club, though neither defender is likely to command a large fee.

Midfielders Danny Drinkwater, Ruben Loftus-Cheek and Ross Barkley have all lost their way after promising futures in the game and seem unlikely to be part of Tuchel’s plans. Lewis Baker, who has spent the last seven seasons out on loan, is another forgotten man who could finally be sold by the Blues.

Chelsea may be able to obtain a respectable fee for midfielder Tiemoue Bakayogo, who has spent the last three seasons out on loan and is attracting interest from AC Milan.

Arsenal are said to be in the running for Tammy Abraham, who could generate a fee of close to £40million this summer.

Michy Batshuayi and Kenedy will struggle for game time once again, but are unlikely to want to head out on loan once again as they seek a permanent home elsewhere.