Timo Werner had a ‘positive season at Chelsea and will be bigger and stronger from it’, insists Jerome Boateng

Jerome Boateng has leapt to the defence of his old Germany team-mate Timo Werner by insisting his debut Chelsea campaign was ‘positive’ and now expects him to flourish on the international stage at the forthcoming Euros this summer.

Werner was expected to plunder in the goals for Chelsea – following his £53million switch from RB Leipzig – as they looked to make an assault on the Premier League title this season.

However, the 25-year-old was more synonymous with being offside than scoring. He only netted 12 times in 52 games for the west London club – a goal-per-game ratio of only one every four games. 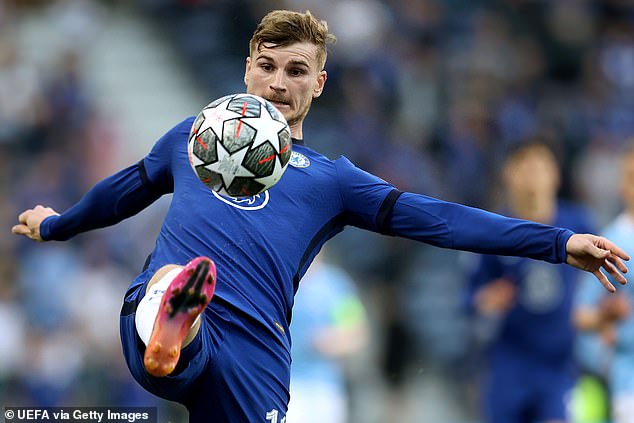 Werner’s pace and work rate cannot be questioned but his timing and finishing left a lot to be desired – as highlighted by his goalscoring record.

Despite his inconsistencies in front of goal, Chelsea’s No 11 did pick up silverware as the Blues won the Champions League last month.

Boateng believes Werner will only grow from his first season in England – with Germany set to benefit at the Euros with their star striker now a Champions League winner.

‘Timo has changed country, club, playing in a new league,’ Boateng told BILD. ‘It is not so easy.

‘Nonetheless, he scored his goals, provided assists, was present, went through a hollow and came out and now he’s the Champions League winner.

‘For me, it has been a positive season with the usual ups and downs. It makes him bigger and stronger and he learns from it.

‘At the Euros, we will see another Timo Werner, a hungry Timo. A Timo with more arrogance, because he has just won the Champions League.

‘It carries you. He will show who he really is.’

Chelsea interested in signing Champions League-winner on a free transfer